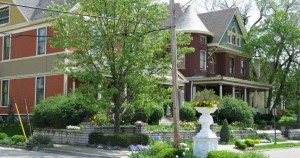 The St. Anne’s Hill Historic District consists of fourteen blocks of residential housing directly adjacent to and east of the central business district of Dayton, Ohio. It is one of the most cohesive groups of early residential buildings remaining in the city and is located between the Oregon Historic District and the Huffman Historic District. Variety of building size, use, style and placement adds to the visual richness of the district.

The neighborhood is characterized by wide streets and large shade tress that practically hide the buildings from view in the summer. The district consists of approximately 280 buildings, not including garages and outbuildings. The overall architectural feeling of the district is one of predominantly folk-type dwellings with Victorian detailing and a scattering of late ninteenth century high style residences. It is, and always has been, mainly residential with a period commercial strip (Fifth Street) bisecting the neighborhood. The houses remain mostly single family with some multi-family units. It is roughly bounded by Route 35 on the south, Keowee Street to the west, Fourth Street on the north and McClure Street to the east.

Learn more about our neighborhood by viewing a map of the district, learning about our historic society, browsing our newsletters, or attending a neighborhood event.